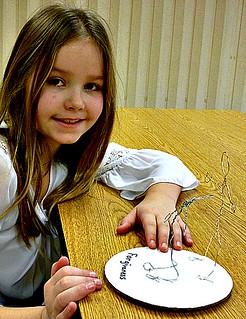 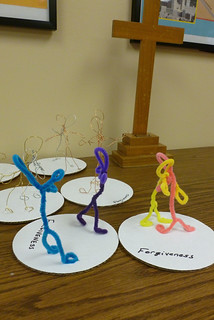 In the Art Workshop for our current Rotation, kids are creating grace poses.

After hearing the Parable of the Prodigal Son, they are sculpting with wire or pipe cleaners, a picture of forgiveness and grace in action.

Because that is what the father offered his wayward son: grace.

Exhibited behavior by the son has deeply wounded his father.

The father could have replied with rub-it-in-your-face contempt: I knew you’d amount to nothing. I told you so!
He could have displayed disgust: You’re back? Don’t expect a handout from me.
He could have shown a stiff shoulder: Who are you and what do you want?

But instead, he shows love and forgiveness; he grants grace.

This Art Workshop lesson gives kids a chance to visualize and express what it is that grace looks like. I saw hugging, arms out-stretched and bended knees.

Grace is God’s unconditional love that forgives us even when we mess up.
We deserve the worst, but we are offered an escape route. A do-over.
And it’s a free gift!

Explore this concept further in your family unit. When your child brings home their wire sculpture, ask them if you can play with it. (You may need to remove the staples holding the figures in their current pose.) Reread the story in Luke 15:11-32 with your child and pause to shape the figures…

Photo credits: from my archives.

2 thoughts on “How to portray grace by bending wire”

October 10 is World Mental Health Day. On this day I pause and celebrate my return to mental health—the totally *unexpected* side effect of changing my diet (which I undertook for physical health needs).