The crowd inside the house was packed tight. And now four hard-working, faith-filled, determined men had created a hole in the roof so as to lower their paralyzed friend into Jesus’ presence. These friends were certain that Jesus would heal their buddy.

They chose to act as if it were already true.

I have read this story countless times. (It’s what I do when I am writing Rotation lessons.) I even will find myself returning to the story, reading it again, after the lesson is complete. Why?

Because usually I discover a new insight.

And sure enough I did. Something occurred to me that I hadn’t previously considered.

When Jesus says to the lame man:

Get up, take your mat and go home.

What would have happened if the lame man hadn’t gotten up?

What if he was too afraid?
(He could fall flat on his face, and make a spectacle of himself!)

I had discovered another miracle in this story! The story that already contained several miracles — the industrious nature of the four friends, who overcame hardships to take a friend to Jesus, and the miracle of sins being forgiven and of course, the miracle of a previously paralyzed man able to walk! And now this miracle:

The lame man had to get up. He had to act as if the miracle were true.

Immediately the paralyzed man stood up. He took his mat and walked out. (Mark 2:12)

Acting on a truth is what is needed for it to actually become your truth.

What is stopping you? Can your faith be an instrument that helps someone “get to” Jesus?

What about your kids?

You need to be brave — to “act as if” — to take part in miracles – however big or small they may be.

Photo credits:
The lame man walks is a screenshot from a video posted by Bible Society Australia, who licensed their work under a Creative Commons (BY-NC 2.0) License.

Here’s an activity to do with your family, and questions to discuss, about our current Rotation on four friends who bring a lame man to Jesus.

Make cups of hot cocoa but leave out the sugar. Don’t say anything about your omission but allow everyone a chance to sample their cocoa.

Ask: What do you suppose is missing?
I am wondering if cocoa without sugar is sort of like our lives without Jesus?
I wonder what our lives would be like without Jesus’ love?

Pass around a sugar bowl and allow everyone to stir in to their cup, perhaps two tablespoons of sugar. After everyone has tasted their adjusted cocoa…
Ask: How does it taste now? 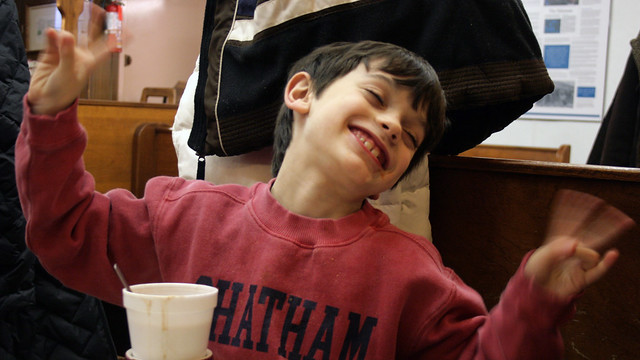 Ask: I wonder how adding sugar to your cocoa, is like adding Jesus’ love to your life?
How does having Jesus as your friend make life sweeter?
Say: Let’s read about a time when a man who was paralyzed (he couldn’t walk) had a sweetened life because he met Jesus.

Read Mark 2:1-12. Alternately, ask your kids to help you tell the story. Check the Bible for accuracy.

Ask: Would the man likely have been able to see Jesus without his friends help?
How has someone helped you recently and made your life sweeter?
What are ways that our helping other people is like bringing them to Jesus?
Are there other ways that we can “bring” people to Jesus by helping them?

Say: Those four friends had a lot of faith in Jesus. Jesus wants us to use our own faith to help spread Jesus’ sweet love.

A man who was lame (i.e., couldn’t walk) was taken by four of his friends on a little ride on his mat. Can you see it? Four men, each holding a corner, struggling to carry their friend.

It probably wasn’t the sort of ride that the man expected. If he’d have known his friends would lower him to see Jesus from a roof top, would he have consented to be carried?

The Bible doesn’t tell us, but I think that he’d likely say, “All that work to see Jesus? Don’t waste your time friends. Jesus probably won’t have anything to do with me!

Why such a negative view of himself?

In Bible times it was believed that if you were sick, it was because somewhere in the past, you (or perhaps your relatives!) had sinned. This lame man felt guilty – he had been taught that he must have done something to deserve his fate!

But, his friends were persistent. They didn’t let anything stop them in their quest to get their friend an audience with Jesus! They just knew that Jesus could heal their friend.

“Wait,” you say. I’ve jumped ahead in the story. I’ve skipped the part where Jesus tells the man to get up and walk.

And then we could say that it was a miracle.

I didn’t mean that miracle. I meant a different miracle. Did you know there is more than one miracle in this story?

How about the one where the real heros of this story shine? We all know that Jesus will perform a miraculous healing. So, who are the unidentified super stars? (Cue the Superman music?) 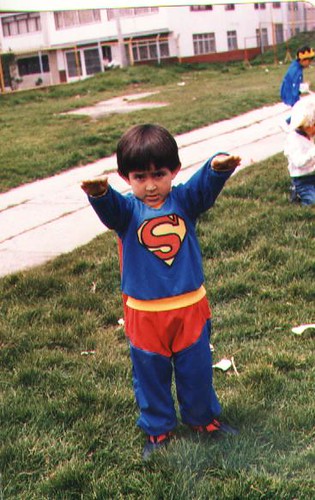 That’s right, it’s the four friends! It’s a miracle that the paralyzed man had four friends who persisted in carrying him to Jesus!

The friends needed courage and creativity. They needed the right equipment! They gave 110%. Taking your friends to Jesus is worth it, and these four friends were sure of that.

How about you? What would you risk to take a friend to Jesus?

But I don’t feel comfortable inviting people to church, you say.

But there are other ways to “bring” someone to Jesus. Discuss it with your family. Here are a couple of ideas:

What will you do to take a friend to Jesus?

During the school year, each Rotation for our Cool Disciples (our 1st – 6th graders at FUMC in Ann Arbor, MI) includes several workshops that each teach the story using the concept of Multiple Intelligences. (True Rotation Model goodness!) In November 2010, (and in January 2017 — we repeat stories every six or so years) we studied about four friends who worked really hard to bring a paralyzed man to Jesus. Read the story in Mark 2:1-12. 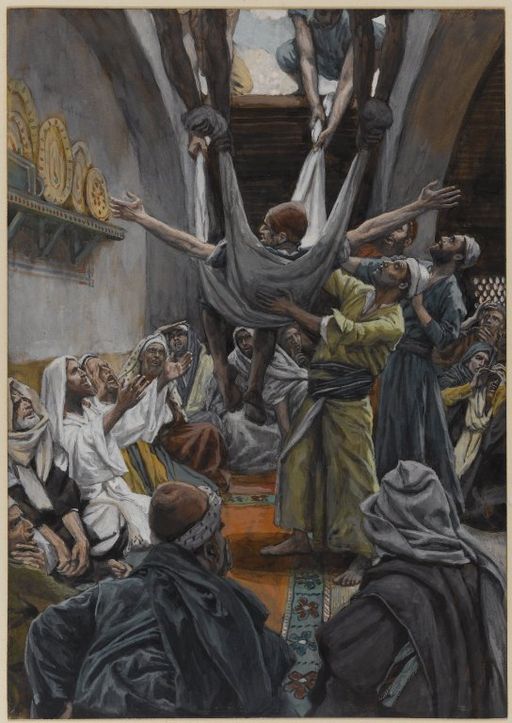 For prosperity, here is what we did in each workshop, for the Faith Through the Roof Rotation:

I wonder what your favorite workshop was?

Edited to add pictures… in the Cooking Workshop students built houses, complete with Teddy Graham people – to use as a storytelling kit. Before they could eat their creation they had to tell the story! 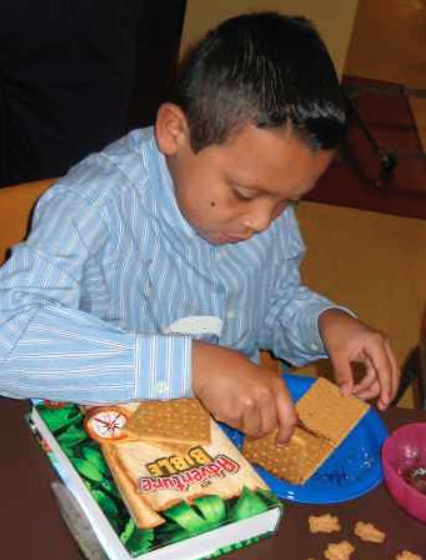 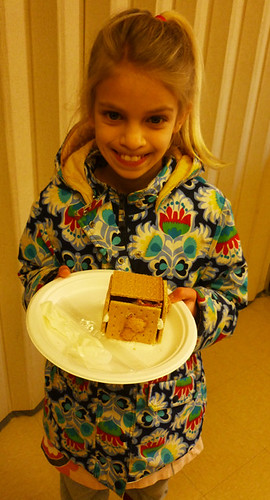 And in the Art Workshop (in 2017) we created Rainbow Scarfs to give away to someone we felt needed some extra love. Here the circles are prepared… 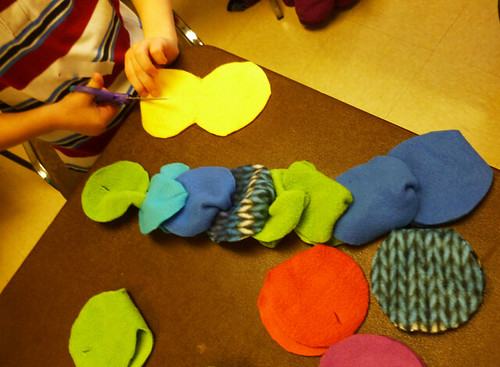 Check out the growing list of opportunities to foster faith learning at home using this story.

Photo credits:
A painting of our story by James Tissot, in the Public Domain, via Wikimedia Commons.
Other photos are from my archives and are copyright.