When someone gives you a gift, what is the standard, considered-good-manners, expected response?

(Everyone say it all together…)

Unfortunately, kids aren’t born knowing how to be thankful.

Now, I know. You are well-aware of your parental requirement to teach your children manners. (Please, thank you, you’re welcome, and the rest).

How about training them to have a grateful heart? 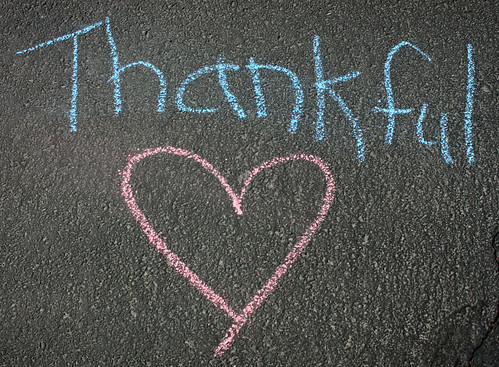 Need an ingress to this topic? Our June Rotation offers an appropriate Bible story. We’ve been studying the “Widow’s Offering” from Mark 12:41-44.

We’ve already learned that gifts given to God are called offerings. Our offerings can be time, talents, or money.

We’ve also learned that the woman in our story could have given everything she owned (two, small coins!) out of trust that God would provide for her needs.

What about the possibility that the poor widow gave because she was grateful?

For the widow in our story, it probably wasn’t her first time giving an offering. She was likely in the habit.

Perhaps we need to practice being thankful.

Here are some ways…

What are your ideas for practicing gratitude?

Kids participating with the Cool Disciples have been learning this month, about giving. They’ve learned how our offerings can be more than a monetary gift; they’ve had two chances to work at it during Sunday’s Cool! One week they helped make decorations that will be used for Vacation Bible Camp in July. Last week they made cookies to share with Alpha House. Each week they’ve listened to the story of a poor widow giving all that she had (in Mark 12:41-44). What was Jesus trying to say about this widow’s extravagant gift?

This woman was giving all that she had out of trust that God would supply all of her needs.

God is good; all the time. This is something we know inherently. But do we live as though we believe it?

How about talking about it with your family! Gather a Bible and a fist full of coins (the more the merrier). First read the story together in Mark 12:41-44. Then gather everyone around the computer and scroll down only far enough to expose a speech bubble and its question.

Why do you suppose Jesus was watching people give their offerings?

No right or wrong answer to this one. Did you know the subject Jesus taught the most about was money? It’s almost as if Jesus were sitting there, waiting for a teachable moment!
Time Out. Talk about…

The teachable moment arrives when a widow gives her offering. What is a widow?

A widow is a woman whose husband has died. Most women in Jesus’ day didn’t work. Widows had to be taken care of by their family. It is likely that this woman didn’t have anyone to support her as, Jesus seemed to know that she was poor.

Jesus had watched rich people drop lots of coins into the offering box. (Since all money was coins it would have made a lot of noise going in!) Yet Jesus said that the poor widow had put in more than all the others! How can her gift be larger than what the richer people gave?

Here’s where your coins come into play. It’s probably not a significant pile of cash, but let’s just say: you are rich! Look at all the money you have! You’ve got plenty!

Pick up two coins. Since you are rich do you suppose you would notice if you had two coins less? (Probably not.)

Hold just the two coins and put the other coins away. Now you are poor! You have only two coins! What happens if you give away these two coins?

This is what Jesus meant; the rich people gave a lot because they could afford to do so; they had plenty left over. But the widow gave even though she was poor. She put in everything she had. She gave all she had to live on!

If the widow gave everything, where did she expect her next meal to come from?

The women had the chance to give a gift. She gave all she had, trusting that God would take care of her!

Jesus is not saying we have to give everything we have. He is saying that the amount of the gift isn’t really important but the attitude in which a gift is given is important. Jesus wants us to trust God to provide for our needs! Let me tell you: It’s not easy trusting God like that! But you know what? It makes me giddy when I do and he provides! (Ask me about it.)

When we begin to share abundantly, then we make room in our lives for God to bless us abundantly.

What can help you to live as though you believe in God’s abundance?

Photo credits: Click here for info on banner photo (not visible in readers or email).
Other photo: from my archives.

It’s a familiar part of the worship service. 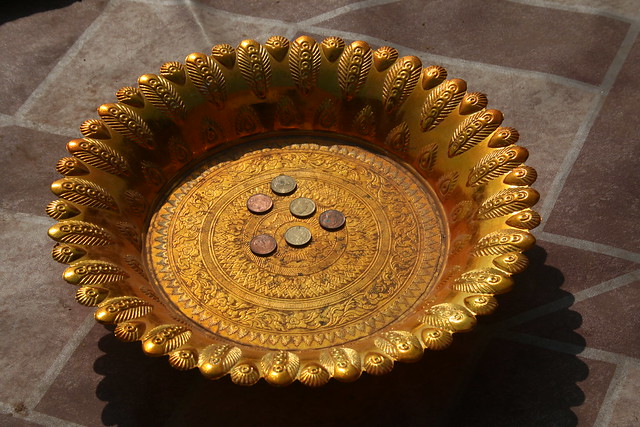 The Giving of Our Tithes and Gifts to God

Also known as “the Offering” or “the Collection.” At FUMC there is beautiful music to accompany this portion of worship. In the summer time it’s usually a soloist (or two or three) contributing their symphonious instrumental sounds. And hey! They are giving a gift to God!

That’s the point of our Rotation this month about the Widow’s Offering – to define an “offering” as gifts given to God and to discover that offerings can be time, talents, or money.

Ready for some family discussion about our story?

What happens in this story?

What was Jesus doing?

Jesus was sitting in the Temple, the place where Jewish people came to worship. He was watching people give their offerings.

What is an offering?

Offerings are gifts to God. Right off the bat we think of an offering as money; it’s what we put into the plate that gets passed around at church. Money is an important part of what we give in our offerings but our gifts can be more than just money!

What are other examples of giving gifts to God?

There are many ways that people give gifts to God! An offering can be our time and our talents as well as our money. In church when we receive the offering, there are musicians or singers who share their gifts with us. The ushers are giving their time and leadership to collect the money we raise for God’s use. Other people oversee the use of the money that is collected. People who are teaching Sunday Cool classes, people singing in the choir, those who take turns in the nursery – all of these people are making a gift of themselves to God!

Of course this is just the start of the list; then there are people who give of themselves outside of the worship service. 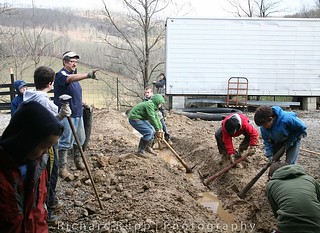 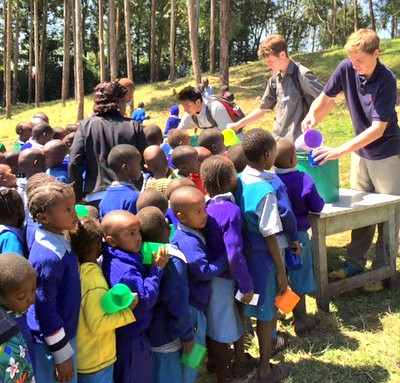 Brainstorm ways that kids can give gifts to God.

For a list of activities where kids can get involved in offering their time see this list for summer 2011. (Updated: sorry, this list is no longer available.)

During the summer our “Cool Disciples” continue to explore Bible stories on Sunday mornings using Rotation Model Sunday’s school. What’s different about summer is that we combine grade groups. This summer we’ve also got more changes – a different choice for older students. Read more about that here.

In June, we are learning about the Widow’s Offering. Read our story in Mark 12:41-44. If you’d like to read a children’s Bible version of this story visit this site.

Here is the schedule for the next three weeks…

If you are in the area please join us for the fun learning at First United Methodist Church in Ann Arbor, MI

Photo credits: Click here for info on banner photo (not visible in readers or email).
Other photo from the archives here.