Woman at the Well 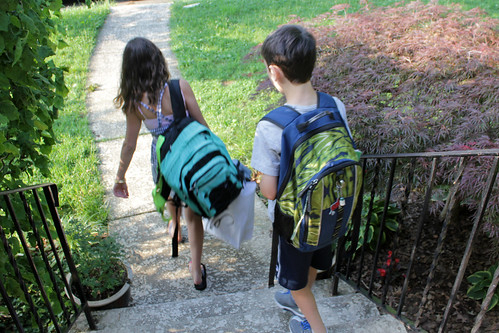 Sounds like they are ready to head off to school. But wait! Don’t let them leave home without a blessing.

To your child, a blessing is a gift. It is a reminder that God loves them.

A blessing is words you speak to your child from your heart, but really they are words from God. God asks you to be his mouthpiece, to give your child words to carry with them.

A blessing is meant to replace secular statements; words that can overwhelm and shut down. Such as:

Instead give your child these words:

God has given you skills and talents that this world needs.
May you be surrounded in God’s love, peace and protection.

Words can have great power. They can over run a child with disbelief or fill them with confidence.

When we speak a blessing, we empower our children. We reach down into the deep well of living water that Jesus offers and draw up a refreshing drink. (John 4:13-14)

Send off each child with a blessing, reminding them that Jesus goes with them.

Have your kids grown taller in the last year?

Ask your kids what other ways they have changed recently.

Change can be surprising.

In the Cooking workshop this month, with a little "shaking up," kids have been changing ordinary ingredients into a tasty snack: individual servings of ice cream in a bag! (Actually, a lot of shaking was required.)

Our woman at the well was a bit shaken up by Jesus’ radical way of noticing her/including her/acknowledging her. A change occurred in this woman – an “inside” change as well as an “outside” change. The outside change was obvious: She was able to over-look judgment and went running to tell others about Jesus! (John 4:28-29)

The inside change? Well, we can’t know for sure, but she likely changed the way she felt about herself; the words she used to describe herself. She was no longer a loner, a loser, someone over-looked and to be ignored.

I believe that getting closer to Jesus, changes us inside.

It’s why I write this blog! (Despite my uncertainty and the disparaging words I’ve used in my past to describe myself.)

“Living water” is what Jesus offers us: a close relationship with God – assurance that God loves us, no matter what. Over time, it can change how we describe ourselves. Can you say this?

I am God’s masterpiece!

How does knowing this change you?
Please, pass this knowledge on to your kids!

Photo credits: Click here for info on banner photo (not visible in readers or email).
Measuring by Woodleywonderworks, who licensed this photo on Flickr under a Creative Commons license.


Are you seeing ads? They are not from me! They are placed by WordPress, who otherwise offers a free platform from which to share lots of good-ness. If you see an inappropriate ad, please report it to support@wordpress.com. Include the URL, the date/time the ad appeared, and a screenshot of the ad.

It’s obvious. The woman Jesus met at the well is clueless. Jesus has offered her living water and she’s stumped.

You don’t have a rope or a bucket and this well is very deep.
Where would you get this living water?
John 4:11

Let’s imagine what was running through her head…

Living water?
What is he talking about?
He can’t mean water out of this well. He hasn’t got a way of getting anything out of this well!
Does he mean some sort of Super water?
Water that has a special ingredient so that I’ll never need any more water?
That would mean I wouldn’t have to trek to this well every day – and in the hottest part of the day so as to avoid those other women.
Yes, please! I’ll take some of that living water!
Who wouldn’t want some of that?!

Discuss what Jesus meant by “living water. How about playing a game at the family dinner table. (Or wherever your family is gathered together.) Call it “Building answers” or “What’s inside her head?” or some other silly title.

Open a Bible to John 4:4 or have this kid-friendly copy of the story available. Tell everyone that Jesus is surprisingly radical in this story. He has offered this woman something that at first she doesn’t understand; it sounds strange to her. (And perhaps to you too!) It would be fun to pretend that we were inside the head of the woman in this story. What do you suppose she was thinking?

Pretend you are at the well and someone, whom you shouldn’t be talking to, asks you for a drink.
What one sentence comes to mind? You’ll probably need to prime the pump on this, so go ahead and start everyone off with: Whoa! Did that guy just talk to me!?
What is the next thought that comes to your mind? Build upon what has been previously thought/said.

Let’s say the progression goes like this:
First person: Who does he think that he is?
Second person: Doesn’t he know he shouldn’t talk to me?
Third response: Maybe I’ll ask him?

Don’t feel as though this has to be a scripted exchange of ideas. It may get silly! And that’s okay. Just have fun and go with what happens. Eventually turn the responses back to speculations about what they think that “living water” is. Allow all responses.

Here’s a way to finish up your game – Say a prayer:
God, who offers us living water; we accept! Fill us full up! We picture ourselves falling back into a calm pool. The living water lifting us, supporting us; we feel very close to you. We thank you that you love us no matter what! Amen.

Photo credits:
Click here for info on banner photo (not visible in readers or email).
Water Splash by Steve Garner, who licensed this photo on Flickr under a Creative Commons License.

Jesus had asked the Samaritan woman for a drink. This seems like an ordinary request. Then why the incredulous response from the woman?

You are a Jew and I am a Samaritan woman. How can you ask me for a drink?
John 4:9

Why was it so unusual for a Jewish man to talk to a Samaritan woman?

First off, in Jesus’ day, it was radical for a man to be seen talking to a woman. Heck, men didn’t even speak to their wives in public. Not only that, Jews and Samaritans didn’t mingle. Jews wouldn’t even set foot in Samaria! (They traveled the long way around, to avoid passing through Samaria.) I’d say that’s extreme dislike.

How to help your child understand how Jews felt about Samaritans?
Ask: Is there food that you really dislike? What would you do to avoid having to eat this food? Push it away on your plate? Leave the table? Leave the house?

A bit of history is needed to understand this animosity. Around 700 years before Jesus was born, Jews were forced into exile (a long way from home) by conquering nations. But some of the people in the area of what later became Samaria, were allowed to stay. They intermarried with people from other nations who were shipped into their land. Fast-forward 70 years when the exiled Jews returned to Jerusalem, they snubbed these people as a “mixed race” and started calling them Samaritans.

And now, that radical Jesus is in Samaria, ignoring cultural restrictions; again.

Why did Jesus feel that he had to go to the avoid-it-at-all costs Samaria (John 4:4)? Because Jesus knew that this woman needed some “living water.”

Jesus knew that this woman was an outsider in her community; why else would she come to the well at noon, the hottest time of the day? Yep. To avoid running into other women. We usually assume this woman was an outcast because of her string of failed relationships (she’d had five husbands). But there is another reason she’d probably had so many husbands: inability to have children. A prime reason in those days, to not be accepted.

Make sure your child understands the way this woman feels.
Ask: Have you ever felt left out?
(Adult: share a time in your life when you felt like an outcast.)

So… what can this story teach your child?

Encourage your child to go for the living water – the “artesian spring within, gushing fountains of endless life” (John 4:13-14).

Photo credits:
Click here for info on banner photo (not visible in readers or email).
Painting by Carl Heinrich Bloch in the public domain, via Wikimedia Commons.
Speech bubbles from public domain via WPClipart.com.

New here? Easily read future posts by subscribing over on the right. Enter your e-mail address to have posts sent directly to your inbox. (Don’t worry. You won’t be overwhelmed. There is one, maybe two posts a week.) Or click on the orange RSS icon to subscribe in a reader.

For kids, repetition is good. This is one of the primary reasons why we use the Workshop Rotation Model for Christian education on Saturday nights and on Sunday mornings at FUMC in Ann Arbor, MI. The kids hear about the same Bible story all month long. It’s not boring because each week they explore the story using a different style of learning – visual, auditory, or kinesthetic – to name a few.

In September, we are studying “The Woman at the Well.” Read about our story in the New Testament Gospel of John at John 4:4-42. For those of you with younger children, don’t look too hard for this story in your children’s story Bible. It likely won’t be there! Instead, tell the story; tell it multiple times. (Repetition!) Download a story version suitable for younger kids. (<–Click on those words to access the file on a Google doc.) Perhaps older kids would enjoy it as well!

For Saturdays at the Green Wood location, here is the schedule for September:

For Sundays at the downtown location, here is the schedule of workshops…

What’s happening in each workshop?

If you are in the area please join us for the fun learning at First United Methodist Church in Ann Arbor, MI

Photo credits:
Click here for info on banner photo (not visible in readers or email).
Jesus and the Samaritan Woman by tribalicious, who licensed this photo on Flickr under a Creative Commons License.